It has taken for a while that I was finally able to update this plugin. This had been the very first plugin that I’d created for the WordPress plugin repository, and to my surprise it became quite popular among WordPress users… Even 2 years after I discontinued the support for it, people were asking for help and suggesting ideas for new versions.

Unfortunately I wasn’t able to add any improvements to it in the past 3 years because my daytime job and my private life had taken all my free time, so there was no real space for side-projects like this. But now, as I’ve became an entrepreneur again, I can schedule publishing small plugins like this into the strategy of our team.

It was really interesting to see how I was coding 3.5 years ago… I’ve learnt so many things about WordPress theme and plugin development in the meantime that I felt like I wouldn’t give my best if I didn’t rewrite the whole codebase of the WP Slide-up box plugin. Now it’s a lot closer to the best-practice standards (well, maybe I’ll read these sentences in 2019 with a smile on my face :)).

One important change for the plugin was that it no longer needs a separate database table to operate. Instead, everything is done using the shortcode. It gives users more flexibility, and makes administration easier. However, for backwards compatibility, I’ve left in there the database reader functions, so if you’ve been using the database table, it won’t break with the update.

Also, the previous, v0.21 version was quite buggy with some animation modes with some image sizes / aspect ratios. v0.3 has great improvements in this field, too.

One of the important new features is the Shortcode generator. This is added instead of the add entry form in the admin. 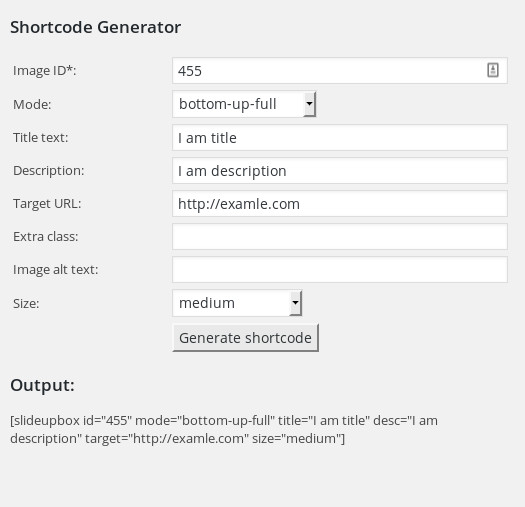 The other new feature is the size parameter for the shortcode: now you can specify which registered image size you’d like the sliding boxes to apply on.

For full list of changes, please check out the changelog page of the plugin.

Roadmap to next versions

However, this plugin is still not a priority at our team, we’ll aim to produce a new version every six months, so v0.4 is expected to be ready by November 2016. Smaller, bugfix versions may appear in the meantime.

Ervin is one of Codeable's selected WordPress experts with 8000+ hours experience with WordPress and online marketing.
Now on a mission to bring closer the language spoken by WordPress developers to clients / website owners.
View my Profile on Codeable

Our lead developer and website strategist, Ervin is waiting for your project.

Archives
Latest Comments
Do you mean finding the image ID when you only know its URL?
Ervin Domonkos, February 13, 2021
hey uhh where do you find URL in images so i can find this image id?
nathan pertierra, February 12, 2021
Hi Patrick, Could you be more specific, please? Where would you like to find the image ID in your templates and which ID are you trying …
Ervin Domonkos, March 27, 2020
how can i get id while templating?
patrick, March 26, 2020
Go to Top