Gutenberg: first impressions as a user

Gutenberg will be the default editor of WordPress 5.0, which is likely to be released during the 2nd half of 2018 (maybe as early as in August, according to Matt Mullenweg’s announcement at WordCamp EU 2018).

To be honest, up till this month Gutenberg has been a pretty grey area for me. I know, yes, that we all have to learn it as this tool is designated to be the future of WordPress. But I was always like “Hey, it doesn’t really look like something that’s gonna be released soon, so better not worry about it yet”.

However, Matt’s announcement has made it clear: the release date of WP 5.0 with Gutenberg is imminent. So I’d better dive into it as quickly as possible…

My first project with Gutenberg

It was fortunate that I had an ongoing project that needed some page building stuff. So I thought I would try doing the job using Gutenberg — why not? I was thinking like if it’s going to be implemented in WordPress Core soon, then it must already be usable for an average page building task.

Well, first I was a bit afraid of using Gutenberg — seeing the really bad ratings it got in the WordPress Plugin repository. Fortunately, the situation is not that bad as how the commenters describe there (isn’t it interesting? When a new paradigm is coming into our world, most of the people are against it. Then, after a while they get used to it). However, it is obvious that Gutenberg is not a mature system yet: there is still a long way to go to make it comfortably usable. But if we don’t really bother about some annoying bugs and its immaturity in usability, then I can say that Gutenberg is a promising system with great potentials.

I’m not going to write about what Gutenberg is and how to use it in this article. I will instead show you what my first impressions were:

I’m writing here about Gutenberg 3.4.0. Hopefully these child’s illnesses will be addressed in the future versions.

After I installed the Gutenberg plugin I went on to edit an existing post. Here is what I saw: 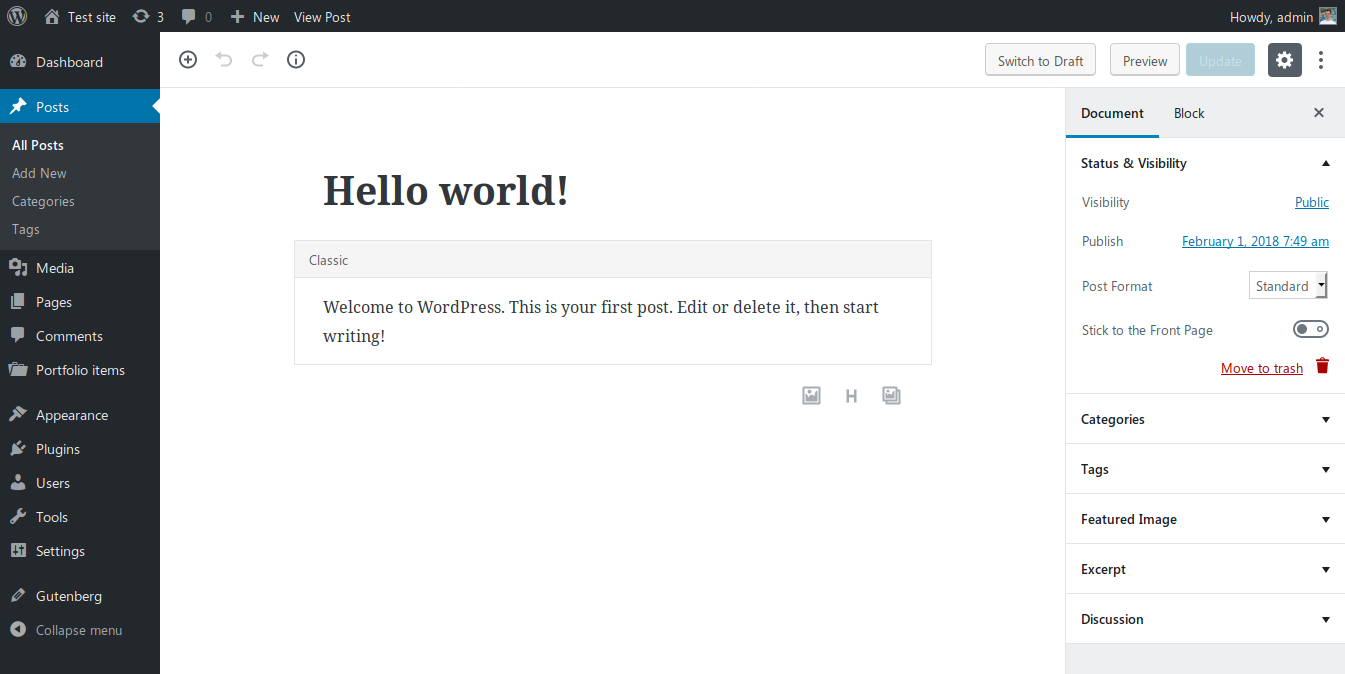 As you can see it, the old content is put inside a Classic block. In my opinion this is a great idea, because it keeps your previous formattings. This way it’s not likely that Gutenberg will ruin your previous contents and layouts (however, it may as there are millions of different WordPress setups out there). Also, I really like its look and feel, writing using Gutenberg has more like a feeling of “Creating”.

The new editor area is a lot narrower than in the old (Classic) one. This is comfortable as it’s easier to write if the 2 ends of a row are not miles away from each other. However, this narrowness was really annoying when I tried to make a multi-column layout.

I really like this feature. I can create multi-column sections that usually can only be found in premium page builders. However, it’s not yet as advanced as WP Bakery’s page builder nor as SiteOrigin or Elementor. Actually, it had a feeling like I’m playing around with a child’s Lego after using some real tools before.

While columns is a must-have tool in 2018, it feels that it’s still very much in the Beta stage in Gutenberg (at least the Gutenberg creators added a beta sign to it – thankfully). The main issues with the current setup are: 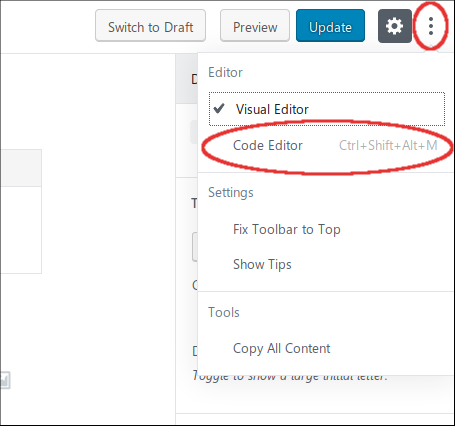 Unlike the premium page builders which use either shortcodes or a complicated markup to build up page structures, Gutenberg keeps the markup as simple as possible. This is good because it gives your content higher level of portability when switching between themes.

Instead of shortcodes, Gutenberg uses HTML comment tags to detect the special settings for the different blocks. You can view this markup if you click on the Three Dots (More) button in the top right corner of the editor and select the Code Editor option.

After this switch you can see the page’s actual markup, which is something like this: 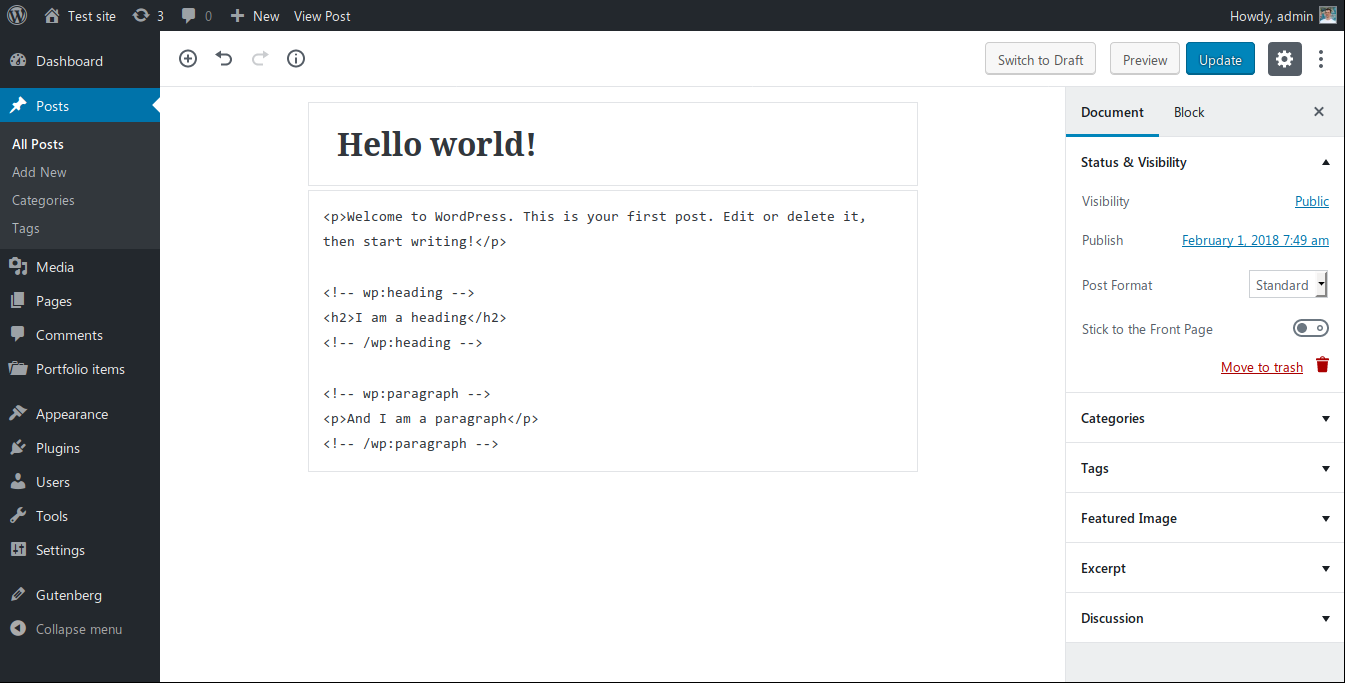 As you can see, there are the wp:heading and the wp:paragraph HTML comments around the Gutenberg blocks, while the real markup is kept as simple as possible.

Gutenberg has a block for inserting good old shortcodes into your pages. However, I found this block type quite useless in its current state. It is a way better option to just create a custom HTML block and put your shortcode there, because that way you can encapsulate the shortcode in container elements — making it possible to add extra formatting or ID anchors to them.

Cover Image is a really great block type. Many modern web pages use the feature to have a wide image block with some heading text on them that separate the different sections of a page.

However, the current version in Gutenberg has 2 big shortcomings:

Fortunately if you are not satisfied with a block’s HTML output, you have the option to edit its output as HTML: 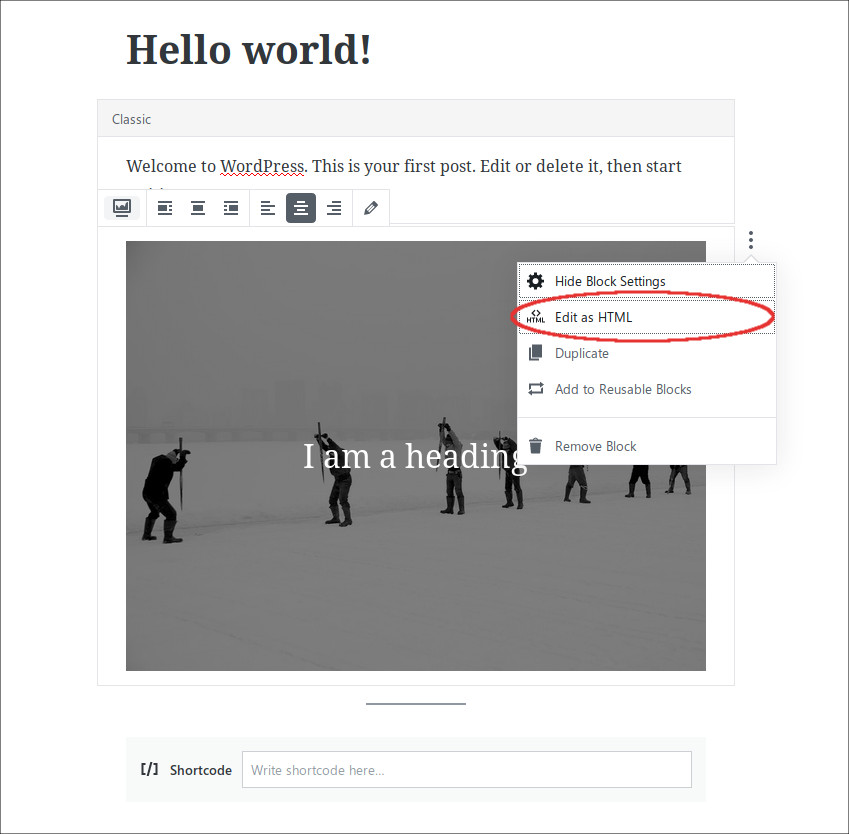 OK, let’s try to add an ID attribute to it in the old-fashioned way:

I though first that I was smart and managed to add my anchorable ID this way successfully. However, the next thing I saw was this – right after clicking outside the HTML block editor: 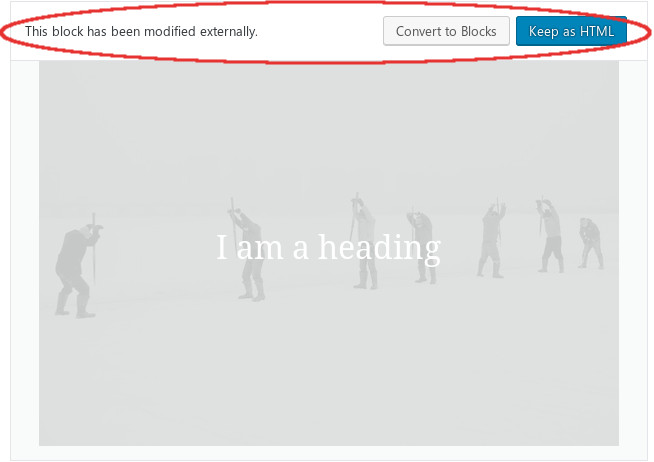 If I chose Convert to Blocks, my block was converted to a simple Paragraph block. So Gutenberg forgot that I was originally editing a Cover Image block. Moreover, it didn’t maintain my custom ID attribute, so it wasn’t a good option to convert back into a block.

The other option was to Keep it as HTML. In this case I lost the improved UI of the block. It’s not a good idea if I ever want to give the editing of this page into the hands of my client as he doesn’t know how to code HTML.

So if you want to add HTML ID attributes to your elements, most of the current Gutenberg blocks aren’t your friends.

Gutenberg was good enough to do what I wanted to achieve with it. But in some places I had to use very hacky solutions which were very far from what our end clients expect in terms of usability. And I’m not sure that I would be able to replicate all the page layouts with Gutenberg that I had built before with more mature page building tools.

For the current version I would give Gutenberg 3/5 points, but it can easily improve if the creators fix the following things:

Hopefully we’ll see great improvements in the next versions, because Gutenberg looks like an editor with great potentials. However, I have a feeling that we are going to switch back to the Classic Editor often after WordPress 5.0 is released…

Ervin is one of Codeable's selected WordPress experts with 8000+ hours experience with WordPress and online marketing.
Now on a mission to bring closer the language spoken by WordPress developers to clients / website owners.
View my Profile on Codeable

Our lead developer and website strategist, Ervin is waiting for your project.

Archives
Latest Comments
Do you mean finding the image ID when you only know its URL?
Ervin Domonkos, February 13, 2021
hey uhh where do you find URL in images so i can find this image id?
nathan pertierra, February 12, 2021
Hi Patrick, Could you be more specific, please? Where would you like to find the image ID in your templates and which ID are you trying …
Ervin Domonkos, March 27, 2020
how can i get id while templating?
patrick, March 26, 2020
Go to Top